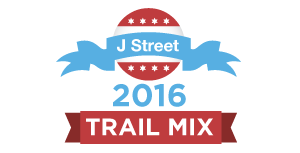 Trail Mix updates readers on the statements of the candidates related to Israel and the Middle East. J Street does not endorse candidates for President.

With last night’s victory in Indiana, Donald Trump became the presumptive Republican nominee for President of the United States. J Street has made our opposition to Mr. Trump’s candidacy quite clear, pointing to his hateful rhetoric and empty foreign policy as evidence that he is unfit to lead this country.

Statements made by Mr. Trump this week haven’t changed our mind.

During an interview with Daily Mail, Donald Trump made clear that he is in favor of continued settlement expansion in the West Bank. Asked if there should be a pause in further construction, Trump said:

“No I don’t think it (sic) is, because I think Israel should have — they really have to keep going. They have to keep moving forward. No, I don’t think there should be a pause. Look: Missiles were launched into Israel and Israel, I think, never was properly treated by our country. I mean do you know what that is, how devastating that is?”

Apparently Trump saw no contradiction between this position and his view that he could broker a peace agreement:

“With all of that being said, I would love to see if peace could be negotiated. A lot of people say that’s not a deal that’s possible. But I mean lasting peace, not a peace that lasts for two weeks and they start launching missiles again. So we’ll see what happens.”

Trump also commented on his relationship with Prime Minister Netanyahu:

“I don’t know him [Netanyahu] that well, but I think I’d have a very good relationship with him.”

So far, the relationship between Prime Minister Netanyahu and Mr. Trump has been rocky — the candidate canceled a planned trip to Israel in December after the PM harshly criticized his anti-Muslim statements.

It appears the candidate who only a few months ago said he’d be neutral on the Israeli-Palestinian conflict could soon emerge as the most extreme major party nominee on the issue we’ve ever seen.

With your help, we’ll be holding Trump — and the down-ballot candidates who embrace his extreme positions — accountable.

If you know anyone who would like you receive these election updates, invite them to sign up here.